Looking for a bitcoin cash exchange where you don’t have to worry about the Man getting all up in your business? Local Bitcoin (localbitcoin.com) may be right up your alley!

What is Local Bitcoin?

Local Bitcoin, (that’s how they stylize it, with a capital “B”) is a peer-to-peer site where you can find other BCH users who are interested in trading BCH for local currencies via a blind escrow smart contract. Note, that ‘BCH’ is the symbol for bitcoin cash, not bitcoin.

Now, something to keep in mind, is that bitcoin and bitcoin cash are two related, but different things. The differences between the two go beyond the scope of this review, but if you would like to learn more, just click on this link. But let’s move on!

With Local Bitcoin, they completely skip the KYC process of forcing you to prove your identity before you use their services.

While the biggest difference is that LB only deal with bitcoin cash, (see above), there are some other differences as well that one may or may not notice. Check out this table taken directly from their site. 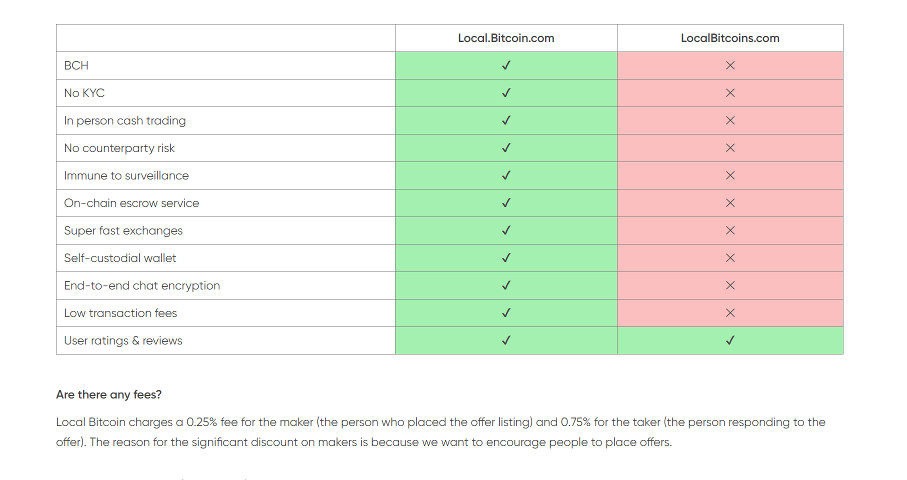 Are There Any Fees?

How Do You Buy BCH at Local Bitcoin?

Very simple here. Once creating your account, you would simply click on the “Browse” tab at the top of your page and you would be taken to a page with some options at the top, nice and clear for your needs. We’ve got tabs to sort by –

When sorting by Deposit Method, you will be shown all sellers that are willing to trade for a particular method. We would list them all here, but there’s actually quite a few options for you to choose from. 34 in fact as this is being typed. Among the most popular choices are

and so many others. (When buying large amounts of bitcoin cash, we do not recommend meeting some stranger in person or sending cash in the mail, but that’s your decision!)

Once sorting these menus to your liking you would just click on the box to the right where you are taken to a page with some more useful information for you. Check out the following image and we’ll talk about what that information might be. 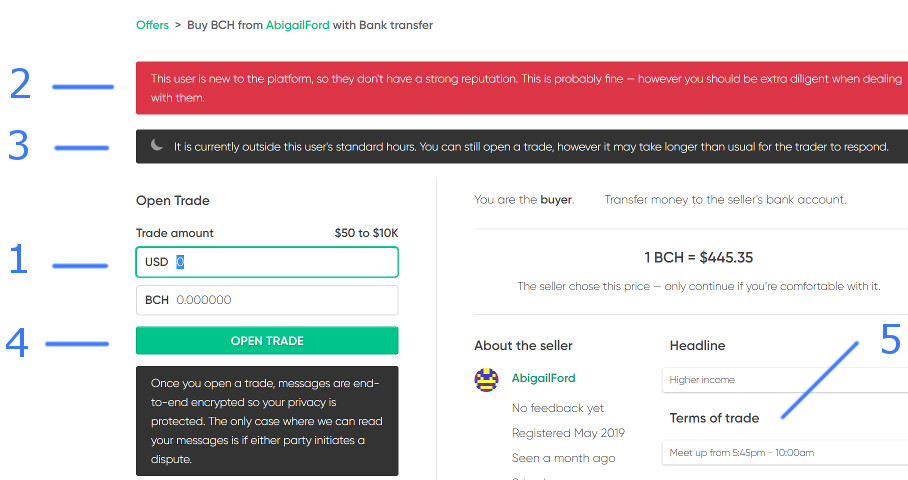 How to Sell at Local Bitcoin

This will work out pretty much the same as the buying part as seen above, the only difference is that you will choose “Sell BCH” on the browse page.

Now, in the name of honesty, this author has a little BCH but isn’t looking to sell it, so I haven’t tried this out, but it all looks pretty straight forward.

How to Withdraw Your BCH

Just take a look at the top of any page on the site and you’ll see the “Wallet” tab. Clicking that takes you right on over to exactly what you would think it would.

You would be given the address to ship your BCH over to whatever software wallet or external hardware wallet you use and  there you go!

What Countries Are Allowed at Local Bitcoin?

To be honest, there probably is a list somewhere of countries that just aren’t allowed for whatever stupid reason. However, if there is one written down anywhere, we cannot find it. This is not ideal, but go and try to use them. If you cannot get in, well, you may fall under one of those!

This is what most people need to know –

“There are a number of precautions taken by Local Bitcoin developers when designing the platform. Here are the most important ways you are protected:”

Now, if you’d like to know a more, technical explanation, there is a pretty good read available on their site under the FAQ’s section, but be forewarned, it is a little on the long side!

What Exactly is a “Blind Escrow”?

Despite the autonomy of the term, blind escrow is a good thing and here’s exactly how that works.

When someone puts BCH in escrow that they want to sell, they are creating an on-chain Bitcoin Cash transaction. The transaction contains two relevant outputs:

Both outputs are P2SH addresses generated from Script templates developed by Local Bitcoin. For those that are truly technical minded, both of these scripts are available for you to take a look at if you really want to over on the LB site.

Awesome. What does that mean?

To “dumb-it-down” as much as we can for the non-tech folks, that essentially means this –

Dave wants to sell some bitcoin cash. By putting the amount he would like to sell in escrow, he is essentially putting it back onto the chain where he can’t touch it. A script then breaks this into 2 pieces. One piece is then put up for the buyers to take a look at and decide if they would like to buy it. The other is the fee charged by LB. This is how they make their money.

Both pieces of the bitcoin cash are now “locked” by script for a lack of a better term.

Now Lisa comes along and wants to buy some bitcoin cash. She agrees on the price listed and goes to the purchase page and does so. Only now is a script written that “unlocks” one of the 2 pieces of BCH, but only on her end. Lisa gets her BCH, Dave gets his money. Now the second piece is unlocked, that’s the fee for LB. Everyone wins!

When creating an account, you will be asked to verify an email address. That’s it!

What are those weird-looking circle icons?
We call these “identity icons”. When sending BCH to a specific address, you can use them to ensure that you have copied the address correctly. The smallest difference in a typed address will result in a completely different identity icon.
Is it possible to change my user name?
We currently do not allow changing of usernames.
Why do buyers and sellers see different prices?
Offer and trade rates on Local Bitcoin have fees priced into them by default, which is why buyers and sellers will see a different rate for the same trade. The prices you see are exactly what you should expect to receive after Local Bitcoin's fee.Local Bitcoin charges a 0.25% fee for the marker (the person who placed the offer) and 0.75% for the taker (the person responding to the offer).
How is my privacy being protected?
There are a number of precautions taken by Local Bitcoin developers when designing the platform. Here are the most important ways you are protected: End-to-end message encryption Messaging forward secrecy Financial forward secrecy Signature system
How does the escrow script work?
When the seller puts BCH in escrow, they are creating an on-chain Bitcoin Cash transaction. The transaction contains two relevant outputs: Escrow output - This output can be spent by either the buyer or seller. Fee output - This is the fee portion of the trade. If the trade is unsuccessful, the fee can be reclaimed by the seller; if the trade is successful, the fee will be swept by Local Bitcoin. Both outputs are P2SH addresses generated from Script templates developed by Local Bitcoin. You can view the annotated Script templates here: escrow script and fee script.
What is the difference between blind escrow and multi-sig?
Multi-sig is another type of Bitcoin P2SH script that uses the OP_CHECKMULTISIG op code. The difference between OP_CHECKDATASIG and multi-signature wallets is that the second party does not need to agree on how and when the BCH is sent. The oracle (which can be the seller, buyer, or arbitrator) doesn’t have the ability to place conditions on the transaction. With a multi-signature transaction, not only must both parties agree on exactly how the BCH is spent, but both parties must be online at the same time to sign the transaction. This is because both parties must sign the full transaction including all outputs and inputs. With a Script that uses OP_CHECKDATASIG instead, the oracle simply needs to give the winner a signature, which they can use at any time to unlock the BCH in any way they choose.
Name of Exchange
Local Bitcoin
Current Price (USD)
Check Now
Visit Local Bitcoin

If you have experience with this exchange please leave a rating.